Khoso Baluch, CorMedix CEO commented, “We are very pleased to have received FDA agreement
to submit our NDA on a rolling basis, and to have commenced the submission process as a result.
We plan to continue our filing schedule and to be on track for a decision in the second half of
2020, although we cannot at this time anticipate the impact on our timetable of the FDA’s
postponement of most foreign inspections. We will continue the NDA submission process along
our planned timeline and will provide material updates as they become available.”
4th Quarter 2019 Financial Highlights

For the year ended December 31, 2019, CorMedix recorded a net loss attributable to common
shareholders of $43.5 million, or $1.80 per share, compared with a net loss of $26.8 million, or
$1.51 per share, an increase of $16.7 million. The increase in net loss was driven primarily by the
deemed dividends recognized as a result of the exchange agreement and modification of certain
warrants totaling $27.1 million for the year ended December 31, 2019, partially offset by
decreased clinical trial expense of $9.7 million. The net loss before recognition of the deemed
dividends during the year ended December 31, 2019 was $16.4 million.
Operating expenses during the year ended December 31, 2019 amounted to $20.9 million
compared with $26.9 million during the comparable period in 2018, a reduction of $6.0 million,
or 22%, due to a 41% reduction in R&D expense partially offset by a 22% increase in SG&A.
Total cash on hand and short-term investments as of December 31, 2019 amounted to $28.3
million, excluding restricted cash of $0.2 million. The Company believes that, based on the
Company’s cash resources at year end plus the $2.5 million of ATM proceeds received since the
beginning of 2020 and the $0.4 million net proceeds from the exercise of warrants, it has
sufficient resources to fund operations into the second quarter of 2021, including the submission
of the NDA for Neutrolin and initial preparations for commercial launch.

CorMedix Inc. is a biopharmaceutical company focused on developing and commercializing
therapeutic products for the prevention and treatment of infectious and inflammatory diseases.
The Company is focused on developing its lead product Neutrolin®, a novel, non-antibiotic
antimicrobial solution designed to prevent costly and dangerous bloodstream infections
associated with the use of central venous catheters. The Company recently completed a Phase 3
clinical trial of Neutrolin in patients undergoing chronic hemodialysis, which showed a 71%
reduction in catheter-related bloodstream infections (CRBSIs) relative to the heparin control arm
(p=0.0006) with a good safety profile. Such infections cost the U.S. healthcare system
approximately $6 billion annually and contribute significantly to increased morbidity and
mortality. Neutrolin has FDA Fast Track status and is designated as a Qualified Infectious Disease
Product, which provides the potential for priority review of a marketing application by FDA and
allows for 5 additional years of QIDP market exclusivity in the event of U.S. approval. Neutrolin is
already marketed as a CE Marked product in Europe and other territories. In parallel, CorMedix
is leveraging its taurolidine technology to develop a pipeline of antimicrobial medical devices,
with active programs in surgical sutures and meshes, and topical hydrogels. The company is also
working with top-tier researchers to develop taurolidine-based therapies for rare pediatric
cancers. For more information, visit: www.cormedix.com.

This press release contains forward-looking statements within the meaning of the Private
Securities Litigation Reform Act of 1995 that are subject to risks and uncertainties. All statements,
other than statements of historical facts, regarding management’s expectations, beliefs, goals,
plans or CorMedix’s prospects, future financial position, financing plans, future revenues and
projected costs should be considered forward-looking. Readers are cautioned that actual results
may differ materially from projections or estimates due to a variety of important factors,
including: the results of our discussions with the FDA regarding the Neutrolin development path,
including whether a second Phase 3 clinical trial for Neutrolin will be required; the resources
needed to complete the information required to submit a new drug application for Neutrolin to
the FDA; the risks and uncertainties associated with CorMedix’s ability to manage its limited cash
resources and the impact on current, planned or future research, including the continued
development of Neutrolin and research for additional uses for taurolidine; obtaining additional
financing to support CorMedix’s research and development and clinical activities and operations;
preclinical results are not indicative of success in clinical trials and might not be replicated in any
subsequent studies or trials; and the ability to retain and hire necessary personnel to staff our
operations appropriately. At this time, we are unable to assess whether, and to what extent, the
uncertainty surrounding the Coronavirus pandemic may impact our business and operations.
These and other risks are described in greater detail in CorMedix’s filings with the SEC, copies of
which are available free of charge at the SEC’s website at www.sec.gov or upon request from
CorMedix. CorMedix may not actually achieve the goals or plans described in its forward-looking
statements, and investors should not place undue reliance on these statements. CorMedix
assumes no obligation and does not intend to update these forward-looking statements, except
as required by law. 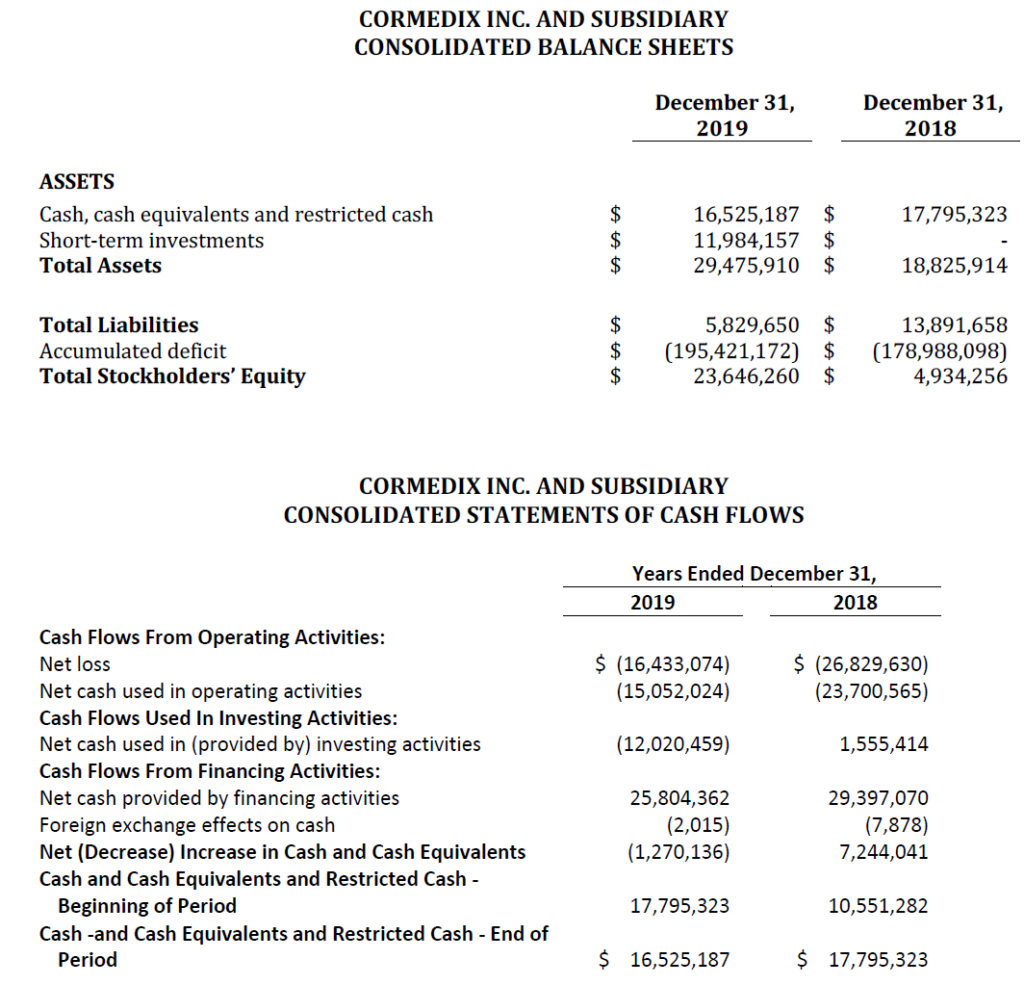